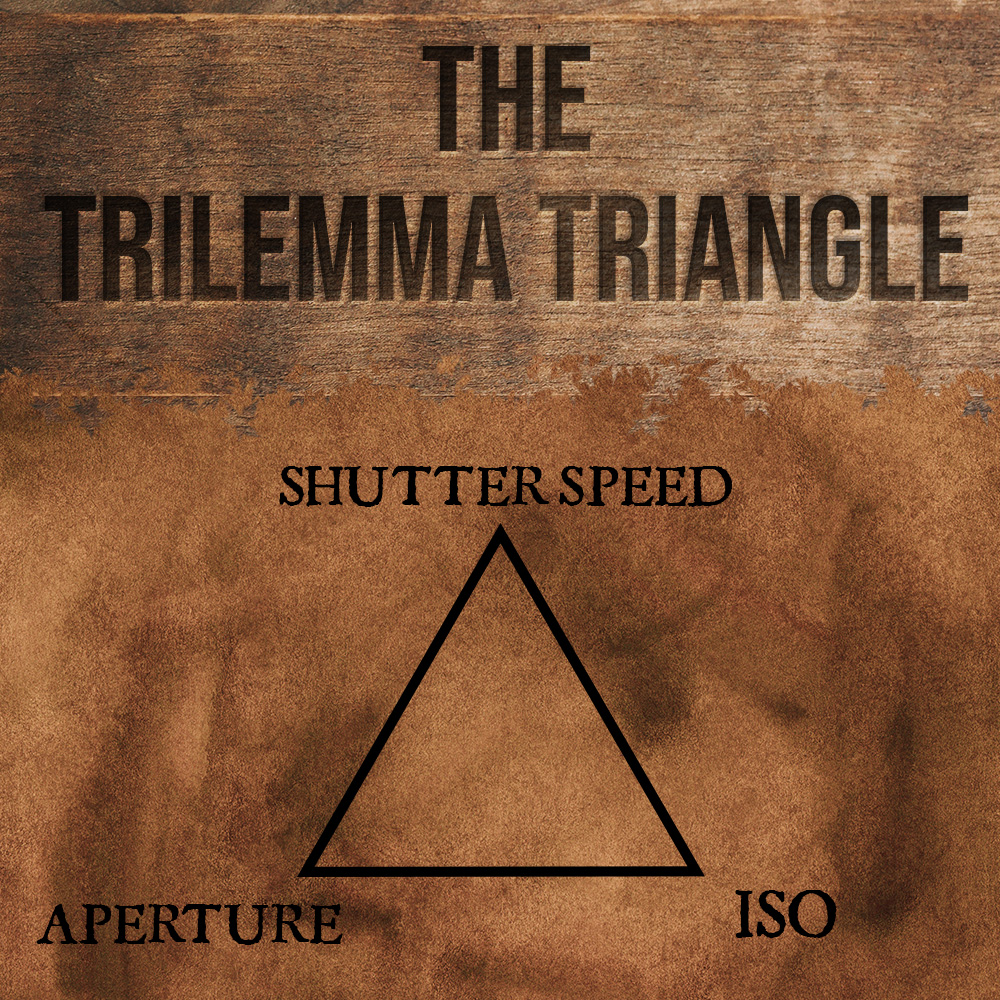 The trilemma triangle of shutter speed, aperture and ISO.

Are you still struggling to find the right balance between your shutter speed, aperture and ISO? Allow me to shine a light!

All three of these things affect light in a different way.

Aperture – Determines how much light should hit the sensor.

I’ll use your eye as an example. The shutter speed is your blink speed. Aperture is how wide or narrow your pupils are open. ISO is how sensitive your eyes are to light.

I’ll elaborate more on these 3 terminologies.

The shutter speed is how quickly your camera captures light/a photo.

You need to choose between these two.

A slow shutter speed can be used for long exposures, such as capturing the Milky Way.

Although, a bit of motion blur could help emphasise the motion of the action and tell a better story.

If you want to focus specifically on a flower, choosing a low aperture will be beneficial. Because then you will have a shallow depth of field*, which means lots of blur. A low aperture would be something like f/2.8 or less.

If you have a standard kit lens (18-55mm f/3.5 – f/5.6), then your lowest aperture will be f/3.5 at 18mm. Surely you’d want to zoom in a bit when capturing something such as a flower, to around somewhere between 35-50mm. At that focal length*, your aperture will roughly be around f/5. It can’t go lower because of the limitations of the lens. If you want a lower aperture I’d recommend getting a different lens. Such as a 24-70mm f/2.8.

Is there enough natural light? Yes or no?

If there is enough natural light/sunlight, set the ISO as low as possible such as 100.

If the sun has already set, it’s cloudy or you’re indoors, consider bumping up the ISO slightly.

ISO helps to make your sensor more sensitive to light. This means more light is hitting the sensor. This also means you can increase your shutter speed for a sharper photo. This comes at a cost though, in the form of noise or grain.

The two pictures below demonstrate ISO. The photo on the left has a low ISO of 100 and the one on the right has a high ISO of 20 000.

This is an extreme example of high ISO. You’ll never have your ISO this high, but it exaggerates the connection between ISO and grain on a photo. So use your ISO wisely.

Let me demonstrate these 3 terminologies by putting them all together.

For this example, I’ll use a flower.

This means we’re choosing a fast shutter speed such as 1/500 of a second.

That leads us to aperture.

Let’s go with near.

This means we’re choosing a low aperture such as f/2.2.

Is there enough natural light?

For this example, the flower below had enough natural light as it was directly in the sunlight. This meant I set my ISO as low as possible, which was 100.

Put everything together and this is the result. (Edited with my Lightroom presets.)

Let me give another example using a landscape.

This means we’re choosing a fast shutter speed such as 1/1250 of a second.

That leads us to aperture.

Let’s go with far. Here I photographed a landscape and wanted to make sure everything was sharp and in focus.

This meant choosing a high aperture of f/7.1.

Is there enough natural light?

When I took the photo it was just past noon and a little bit overcast, but there was more than enough light. Which meant using a low ISO of 100.

Usually, I won’t recommend shooting around noon because the light can be extremely harsh and doesn’t always look as pleasing. But because there were many clouds blocking some sunlight, it made for a great dramatic landscape.

Put everything together and this is the result.

If you’re just beginning to get into photography and learning these basics, learn them well. Know your shutter speed, aperture, and ISO. When you know these three things so well and you can look at a scene or photo and immediately say that you need to increase your shutter speed, or decrease your aperture, or maybe you can bump up your ISO slightly, then you’re ready to move on to the next step.

I’d recommend learning the basics of composition next.

I hope this was helpful. Let me know in the comments below!

If you found this helpful, here are 5 photography tips for beginners.

Learn about developing your eye for detail.

Thinking about which camera you should buy to begin photography?